​The sea is getting warmer. The visibility is improving. Summer is here and the sun is almost certain to shine. With these thoughts in mind a diving weekend was planned for the last weekend in June targeting dives on the Aeolian Sky and the submarine wreck of HMS Sidon.

By the end of the weekend, and having switched to plan C, we had dived on 4 sites; Ringstead Bay Reef, the Aeolian Sky, the Countess of Erne and a drift along White Nothe Reef. The sea temperature has increased to 14°C and visibility was around 4 to 5m.

Saturday began with a dive on Ringstead Bay Reef which is a rocky reef in about 10 meters of water. The shallower parts are covered in kelp with the deeper parts and surrounding seabed clear of seaweed and home to fan worms, anemones and the odd spider crab. This was followed by a dive on the Aeolian Sky which is a large wreck in parts standing 13m above a 30m seabed. Plenty of tompot blennies and jewel anemones were seen as well as the shadowy forms of many larger fish swimming about on the edge of the 4m visibility. Barring a bit of seasickness this was a very successful and enjoyable day.

Sunday started with heavy fog and we decided to dive within Portland harbour while the fog remained. For us this meant a dive on the Countess of Erne. While this wreck is well known to many there is always plenty of life to see such as the Nudibranch below photographed by Alex Gibson. 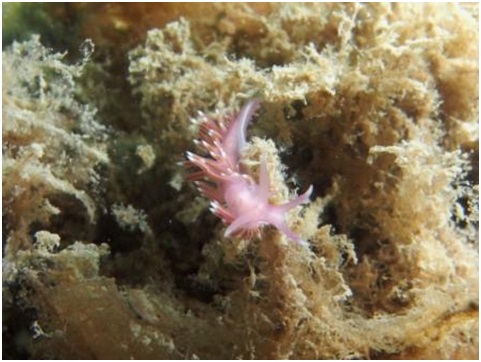 The fog began to clear after we surfaced so we moved on to another rocky reef near White Nothe for the second dive. Here a current was running which carried divers east over a rocky and sandy seabed where spider crabs, dogfish, cuckoo wrasse, the odd scallop and even a sting ray were encountered.

In all a very enjoyable weekend!

Many thanks to all who came and especially skippers Stuart Allen and Paul Minto and dive manager Alex Gibson.

This site uses Akismet to reduce spam. Learn how your comment data is processed.